I'm impressed and touched to see that some of you are still visiting this site. Far be it from me to get in your way but my son tells me that all of the stuff that's here has been carried lock, stock and sentence to my new wordpress site -  www.judecollins.com - which is where I'm blogging from now. It's just important (well, semi-important) that you know I'm still fighting the good fight at the new site.

We have moved (royal plural, there)...

If you've landed on this site, my apologies. I have now moved to a Wordpress site - www.judecollins.com.

Michael D "closes the final chapter"? Or maybe not.

So - President Michael D Higgins is to visit Britain and call in on the British head of state for a chin-wag. Well, more than that, really. This is the first time the Irish head of state has made an official visit to Britain. Aren’t you excited?

Much was being made of it this morning on BBC Raidio Uladh/Radio Ulster and on RTÉ. Conor Bradford talked about the visit “closing the final chapter” in relations between the two countries, and on RTÉ Ming Campbell was talking about how the cordial coming together of Michael D and Elizabeth II would reflect the closeness that exists between the two populations.

There’s truth in that. We do share interests - sport, literature, language, media - with our nearest neighbour. But how is it that umpteen commentators at the time of QE2’s visit to the south and now commentators on Michael D’s visit to Britain will talk about the event in all sorts of ways, talk about the improvement in relations (we were reminded this morning how overjoyed the nation was when QE2 said the cupla focal and Mary McAleese mouthed ‘Wow!’) and yet no one will dare mention the one thing that has marred relations between Britain and Ireland for near a century now: the north. We were even told the civil war was fought, not over partition but over the oath to the British monarch.

Maybe it’s like the point that was raised at that Strabane debate on Thursday last: now would be a very bad time to have a border poll because it might inflame loyalists. Is that why the core matter - Britain’s claim to jurisdiction here - is avoided: it might upset the loyalists? I get very worried when I hear people talking about closing the final chapter with a presidential visit. It’s like looking at a great six-inch stab-wound and saying “Ach here, sure I’ve a bit of sticking plaster, no problem”.

Maybe I’m naive. Maybe it’s all about softly-softly. Maybe Basil McCrea’s urging of the right to raise taxes here is, whether he realises it or not,  another tiptoe step towards Irish people finally running Irish affairs. But Michael D’s visit still has a whiff of Basil Fawlty to it: don’t mention the border.
Posted by Jude Collins at 9:01:00 am 5 comments: 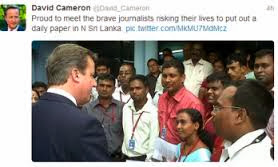 "The information in that book is completely chilling. It's an appalling set of allegations and of course these allegations have been backed up by the work of the journalist Anne Cadwallader who has had them verified. There are legitimate accusations of war crimes that need to be properly investigated. That is actually what the British government itself found … but it hasn't effectively answered them. They need to be answered."

Well actually not quite David Cameron. The British prime minister is talking about Sri Lanka, it’s not ‘information in that book’ but ‘images in that film’, and it’s not ‘the journalist Anne Cadwallader’ but ‘The UN special rapporteur’. And finally  it’s not ‘the British government’ (are you kidding?) - it’s ‘the Sri Lankan government’.

All the rest, though, is straight from the horse’s mouth. Dear David is a bit like our own Michael D -  big on the need to condemn horrors as long as they’re far from home. So why would he be so incensed about events thousands of miles away and tight-lipped about similar stuff happening here? Because he might have to do something about the stuff nearer home, that’s why.

But listen, David. Don’t worry. If Blair got off with saying he was sorry for the Irish Famine /An Gorta Mor,  you could probably pull a similar trick with the 120 cases listed in Cadwallader’s book. I mean, you worked it with Bloody Sunday victims so why not with the Murder Triangle people? At the same time I really really really hope you don’t. Get off with it, I mean. If the Sri Lankan government is a horror-show for involvement in the killing of its own citizens, your government should be getting it in the neck too, old boy.

That Strabane debate last night: five things worth thinking about 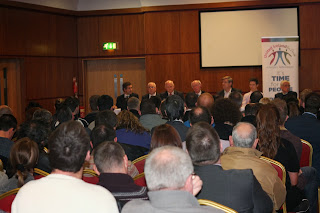 Well. That was interesting. And fun. I’m talking about the debate about/discussion of a (re)united Ireland in Strabane last night. There was what looked to me like a full house to hear the various speakers, including Minister of Education John O’Dowd and a brace of senators from the other side of the border:  Senator Jimmy Harte from Donegal and Senator Mark Daly from Kerry. There were two representatives of unionism -  Paul Wyatt  from NI21 and Terry Wright from ConservativesNI.  And last but a long way from least, Joe Byrne from the SDLP. Your humble scribe was in the chair ordering people about. For two solid hours the discussion continued, passionate at times but never tedious. The audience required no prompting to fire sharp, sometimes jagged questions.

So - did it solve anything? No. But that wasn’t the intention. The intention was to raise issues for and against the reunification of Ireland and yes, there was an imbalance between nationalists/republicans and unionists, but  guess why?  Because  the Ulster Unionists and the DUP chose to send no one to present their views. Despite that, a great range of issues were raised. Here’s the five I found most interesting.

In summary, we need two things: clear, unambiguous, independently-verified information about the actual size of the block grant and the size of the tax money which goes out of here each year; and more discussion like last night, where we think about our reasons for supporting union with Britain and reasons for not supporting union with Britain. Maybe London will continue to keep a padlock on the required information. Maybe after all our discussion we’ll still be as far apart on the constitutional question.  But we owe it to ourselves to get the information and then make a judgement.
Posted by Jude Collins at 6:16:00 pm 8 comments:

N21: the road to somewhere? 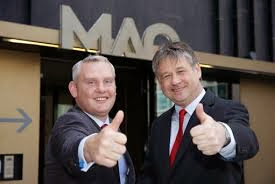 I remember a couple of decades ago having a conversation with a senior SDLP man. For some reason the question of organisations came up and the SDLP man said something that’s stuck with me. The best of organisations, he said,  still depends on, is made or broken by the quality of the individuals who make up that organisation.

I found myself thinking about that this morning as I gird my loins (such as they are) for a visit this evening to Strabane, where I’ll chair a debate (in the Fir Trees Hotel, 7.30 pm) about unifying Ireland. There’ll be a range of speakers from different parties (no, I don’t think the DUP will be there, Virginia, or the UUP) including one very interesting party: N21.

Yes, yes, I’ve heard all the gut-busting jokes about a political party naming itself after a road, about the 21 representing the number of people in it, and the rest of it. What’s significant for me is that its leaders are Basil McCrea and John McCallister. Of all the unionist politicians I’ve met, I’ve found myself warming most to these two men.

I’m not sure why. Maybe it’s just that they strike me as decent likeable people. Maybe it’s that you don’t get the impression they’re sizing you up, taking your political temperature with a mind as open, in Heaney’s words, as a steel trap. They seem to respond to others as human beings. And what they appear to be doing with their new party is something that could ultimately be very good or (from a nationalist/republican perspective) very bad.

The very good thing they are intent on doing is something which I suspect chimes with the thinking of many garden-centre Prods. They don’t want to be cut off culturally or any other way from their Catholic/nationalist/republican neighbours, they want to make this state a place that treats everyone with dignity and equal respect, and they believe that the old ways of narrowness and bitterness are a sectarian cul-de-sac that needs its end-wall bashed in.

Which would be good. Anyone with half a brain-cell knows that sectarianism and bigotry take us nowhere. Instead, like revenge, it digs two graves: one for the person that’s hated and the other for the hater. It’s also the case that N21 have made that rapprochement a central plank of their policy. Were they to succeed, it would be a day of great rejoicing among nationalists/republicans.

Or maybe not.  Because the ultimate goal, the holy grail sought by Britain and unionism over decades if not centuries has been to have a Catholic population here that is happy to remain British, is not sullenly passive but happily active in supporting the union. When that day arrives, there’ll be no need to garrison British troops here because on that day, nationalism/republicanism will have died.

The men of violence 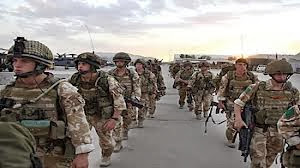 I believe in violence to achieve political ends. I should add, before some troll grabs that first sentence and uses it as a club to thump me: so do you. Why do I say that, Virginia? Bend an ear.

I pay my taxes, as I’m sure do you, to Her Majesty’s Exchequer. That money is distributed in various ways to meet various public needs. It also is sent to what is laughingly called the Ministry of Defence. Some £40 billion each year, so that guns and tanks and bombs and fighter planes and warships can be purchased and so that young men (and women) can be carefully taught how to kill their fellow humans, if H M government says it’s a good idea. There’s also the little matter of the replacing the Trident nuclear programme, which is reckoned will cost around £38 billion on its own. That’s for nuclear weapons which are designed to wipe out hundreds of thousands of men, women and children. Think the Omagh bomb and multiply it by about a zillion. We help with all that.

But of course it’s not only Britain (the third biggest defence-spending state in the world) that’s at it. Practically every country has an army. Even the south of Ireland has one. The line is, as their name suggests, that they’re for defence. So what part of defending the sceptred isle was that Royal Marine engaged in,  when he pumped a bullet into the chest of a wounded Taliban fighter in Afghanistan recently? Was Iraq planning to invade Britain when Blair, in the face of opposition from millions of his own people, lied and then sent in British troops to back up the Yanks?  For ‘Defence’  read ‘Attack’, or if that’s too much, make it War. The Ministry of War. At least that’s honest.

To quote my old class-mate Eamonn McCann, I’m a pacifist by instinct if not principle. But then to quote George Bernard Shaw, you know a man’s principles not by what he says but by what he does.  I pay my taxes. So do you. We all believe in political violence.
Posted by Jude Collins at 9:33:00 am 4 comments: